Story: ‘Fanney Khan’ is a story of hopes, dreams and relationships. It’s about a father who will stop at nothing to put his daughter on the grand stage as the next singing sensation of India. It is the remake of the 2002 Oscar nominated Belgian film Everybody’s Famous.

Review: He couldn’t become Mohammad Rafi, but harbours a dream of his daughter becoming Lata Mangeshkar. Prashant Sharma (Anil Kapoor) popularly known as Fanney Khan among his gulley friends, works hard to make ends meet, idolises Shammi Kapoor and lives only for his dream of superstardom. He fails to achieve that and hence pins his hopes on his new-born, even naming her Lata (Pihu Sand). Now in her teens, Lata not only sings well but also dances like a dream despite her plus size that regularly makes her an object of body shaming on stage.

Anil Kapoor hits all the right notes as a beleaguered father, who is often reprimanded by his own child for being so unflinchingly dedicated in his mission to see her succeed. He strikes the right balance for a middle class man in Mumbai struggling between dreams and reality. This even as his wife Kavita (Divya Dutta) continues to be his empathetic voice of reason. As a debutante, Pihu Sand captures the vulnerability of her character, but one never understands her constant grouse against her father. As the hotshot singer Baby Singh, Aishwarya Rai Bachchan looks befittingly gorgeous, but her storyline is etched without much effort or logic. The talented Rajkummar Rao as Prashant’s trusted friend Adhir, shows his usual flair within a limited scope. While Rajkummar’s chemistry with Aishwarya seems forced, his comic timing comes to the rescue.

Film’s narrative goes slightly out of tune in second half. For example, there is no real backstory for Baby Singh and the only person in her life is a creepy manager, who wants her to stage a wardrobe malfunction for a reality show.

While the second half is long and laborious, earnest performances keep the boat afloat. For a musical, Fanney Khan’s soundtrack doesn’t live up fully except the Achche Din song which is pleasant and the finale song that exudes energy.

Overall, ‘Fanney Khan’ is a star studded musical that starts on a high note and has its moments of glory. It shows how parents live their dreams through children.

It does strike a few wrong chords to culminate into an emotional yet convenient climax. However, the showstopper is clearly Anil Kapoor with a knockout performance that makes ‘Fanney Khan’ worth a watch.

Story: The youngest son of a Muslim family settled in Benaras gets involved in terrorist activities, leading to a bomb blast massacre. His actions have an adverse effect on the family who are left to defend themselves as people who are innocent and not anti-nationals.

Review: Director Anubhav Sinha sets out to lay bare the prejudice that often precedes people’s perception of the Muslim community in our country. In the times that we are living in, where our country is polarised and the cracks caused by the religious divide is getting deeper; a film like this is the need of the hour.

The patriarch of the family, Murad Ali Mohammed (Rishi Kapoor) is a well-respected lawyer who has Hindu friends in the mohallas of Benaras. His daughter-in-law, Aarti Mohammed, (Taapsee Pannu), is also a Hindu. Following a bomb blast, which kills several people Murad Ali’s younger brother’s son, Shahid Mohammed (Prateik Babbar) becomes a suspected terrorist, but refuses to surrender to the police. The horrific incident changes the lives of everyone in the family and Shahid’s father, Bilaal Mohammed (Manoj Pahwa) is taken into police custody under suspicion of being involved in terrorist activities. The family’s friends from other faiths also turn foes, and Murad Ali has no other option but to defend his brother and prove that they are as loyal and as patriotic as anybody else in the country.

Mulk throws light on how people fall prey to political agendas that intend to divide the country on the basis of ‘us’ vs ‘them’. It also digs deeper into how hate propaganda against any religion (in this case Islam) is destructive for a nation and the very fabric of our society. Today, we need to stand up and fight this hatred against Muslims, and dispel the paranoia that stems from Islamophobia. We need to go back and understand what secular truly means, and ask ourselves if our actions go against the very essence of secularism. Through the dialogue-heavy narrative, the film reiterates for the umpteenth time, that terrorism has no religion. The tonality of the film is far from subtle and the perspectives are presented fearlessly. The first half is slow-paced but what really works for the film are the dramatic courtroom scenes, which compel you to think about the extreme Islamophobia that exists around us. Sometimes, without us even being cognizant of it. This religious profiling has created a fear psychosis amongst Muslims, and they are often made to feel like outsiders in their own country. There is a strong dialogue in the film which reiterates this, “Mere ghar mei mera swagat karne ka haq unhe kisne diya? Ye mera bhi utna hi ghar hai jitna ki aapka aur agar aap meri daadhi aur Osama Bin Laden ki daadhi mei fark nahi kar pa rahe toh bhi mujhe haq hai meri sunnah nibhaane ka.”

Rishi Kapoor as the patriarch performs his role with restraint and nuance. The seasoned actor brings gravitas to his portrayal of a Muslim man who refuses to succumb to the polarities manifested by both Hindus and Muslims. And yet, he is aware that he has to prove his love for his country beyond doubt. Prateik Babbar is miscast, as the young Muslim boy who voluntarily chooses to involve himself in a terrorist act despite being raised in a family which has no allegiance to anti-national sentiments. Taapsee Pannu as the daughter-in-law shines in the courtroom scenes, but at times, she falters at delivering lengthy monologues. In the supporting cast, Manoj Pahwa, Neena Gupta and Ashutosh Rana are competent.

Shot in the bylanes of small town India, the film captures the milieu it is set in aptly. The music is the weakest link and the soaring and melodramatic background score in some portions is distracting. Mulk focusses on some hard-hitting and burning issues, while also highlighting the crucial role that the media and various other channels of information play in disseminating the right news and facts to its citizens. It also brings to fore the other horrifying faces of terrorism which often gets brushed under the carpet. Mulk is a film that’s relevant, brave and is a must-watch. It has thought-provoking message which drives home the point – that being a true Indian and real patriot is about embracing people from every faith with an open heart. 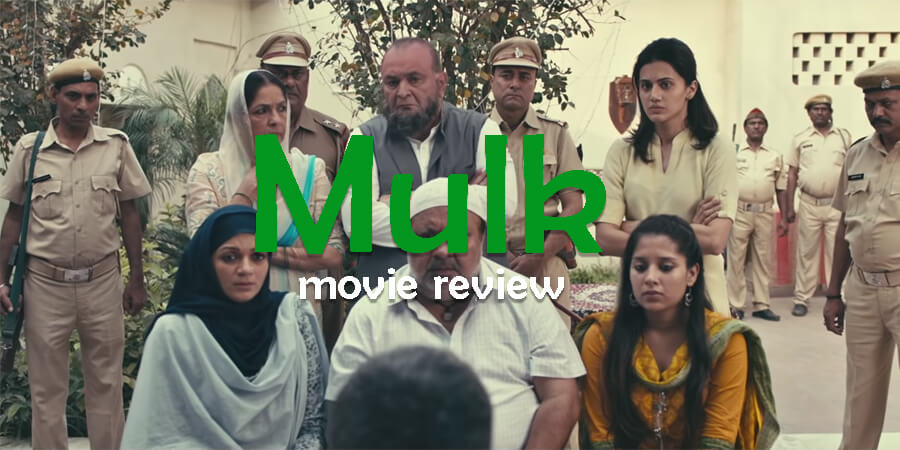